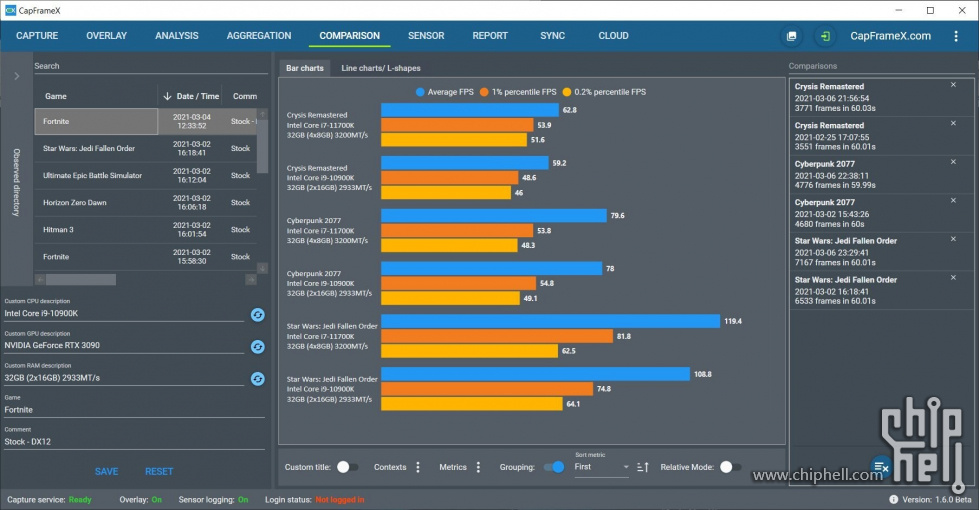 We have recently received some early gaming benchmarks for the upcoming Intel Core i7-11700K after German retailer MindFactory released the chip early. The creator of CapFrameX has managed to get their hands on one of these processors and has put it to the test comparing it with the Intel Core i9-10900K in some gaming benchmarks. Intel has promised double-digit IPC improvements with the new Rocket Lake generation of processors however if the results from this latest benchmark are representative of the wider picture those improvements might be a bit more modest then Intel claims.
The processors were paired with an RTX 3090 and 32 GB of 3200 MHz memory as this is the new stock maximum speed supported versus 2933 MHz on the Core i9-10900K. The two processors were put to the test in Crysis Remastered, Cyberpunk 2077, and Star Wars: Jedi Fallen Order, with the i7-11700K coming ahead in all three tests by ~ 2% - 9%. These tests are unverified and might not be fully representative of performance but they give us a good indication of what Intel has to offer with these new 11th generation chips.